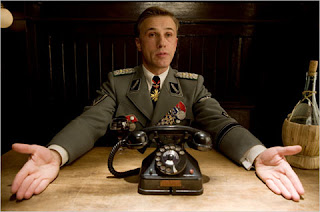 i saw "inglourious basterds" yesterday afternoon, and i straight CANNOT get it out of my head. i l-o-v-e-d loved it. the actors, the script, the art direction, the gore, the fluid switch from french to english to german. even the pitt, of whom i am no big fan but think is a phenomenal actor. i think i'll make a plan to see it again soon. maybe tuesday, when my local cineplex offers large popcorn and large sodey pop for $1 each? maybe so.

i have taken to going to the movies by myself in the last few years, and let me just tell you, i don't know if i ever enjoy any movie as much as the ones i watch alone (with the obvious exception of movies i can quote verbatim, i.e. tommy boy, drop dead gorgeous, aladdin, etc. these are all better when watched with someone who can also say the lines with the movie, and perform any musical numbers with pizazz). i mean, think about it, when one goes to the theater alone, one doesn't have to share popcorn or junior mints or coca-cola just because it's cost effective, one doesn't have to endure their companion's whispers or ill-timed laughs or any other variation on such interruptions, and (and this is a BIG ONE in my case) one doesn't force anyone else to endure one's whispers or ill-timed laughs. it's a win-win folks. plus plus plus, there's no "do you want to sit in the front or the back or the middle" seating debacle. plus plus PLUS, you can get there as early or late as you like, depending on your stance on previews (i personally do NOT like to miss the previews).

okay, granted, like any girl does, i sure do enjoy a date night at the movies, when homeboy buys the popcorn and maybe your hands brush going for some buttery goodness at the same time and you giggle like a teenager and he lets you grab his arm if you're scared (because he gets to pick the flick and he chooses a scary movie because he is a jerk and maybe because you picked the last time and made him see "27 dresses" or something similar) and all of that good stuff. but, i'm telling you, if you haven't sat in a cold theater with a huge box of sour patch kids and a big ol' dr. pepper that's all yours with no one in the seats on either side of you, then you should totally get on it. it's a whole new experience, and a good one at that.
Posted by melissa at 9:59 AM

Labels: got a little off topic there, just really wanted to let you know how bad ass inglourious basterds was

i also like to see movies by myself. and i can only assume that the person helping you do the musical numbers with pizzazz is me. nobody else can lip-synch "a whole new world" like the haney girls. NOBODY.

That's so cool about you going alone!! I get so stupid and want to talk to someone about it...But eating alone and shopping alone-100% love it. haha! And I got your comment but then got crazy busy so I explained the UW thing on my blog!! You werent the only one who asked.. Everyone was like "huh?" hahaha.. I prolly shoulda mentioned it more.

i have to say...i have honestly never gone to a movie theater by myself. it seems stupendous tho.

I love love love going to see movies by myself. It rocks!!!

I've gone to movies by myself. Finding Nemo? Yes. A 6'5" man was denied to watch an animated movie about a young fish that was trying to find his father. Secondly......Grazi.