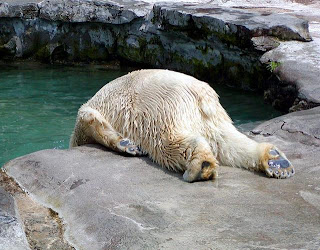 so, i don't get hangovers. literally. never. this fact made me completely unprepared for yesterday's events. allow me to start at the beginning:
the day started out innocently enough. i woke up bright and early and drove down to little rock to attend my favorite one-year-old's birthday party. it was super fun, and the little guy had a blast. aunt melissa threw back a few beers, but that's to be expected. after all the kiddies were gone and the supplies were packed away, a few of us decided to go downtown and grab some drinks before going home. i had approximately two and half beers before making the trek back to conway. i think that brought my grand total for the day to, like, eight cervezas. that's really not so bad, right? i should've been fine. famous last words. i fell asleep shortly after getting back to my apartment at around five. i woke up to my phone ringing at a little after 9. a FOUR HOUR nap on a sunday evening, ladies and gentlemen. while on the phone it occurred to me that i had a massive headache and that my stomach felt horrible. after we hung up, i decided to eat something, figuring that it had been like ten hours since i ate and that hunger must be the problem. so i have a granola bar and lay back down, feeling terrible. about 20 minutes later, i made a mad dash for the bathroom and vomited the entire contents of my tummy, perhaps including some small organs. i was sweating, i was almost in tears, and my hands wouldn't stop shaking. i called ol' scott and bitched and moaned and pitied myself as though i am the only human who's ever suffered like that. in his head, i'm sure he was thinking, "oh, for pete's sake, get over it woman." but outwardly, he was very sweet and full of good advice and optimism. after we hung up, i laid down again, thinking that i could fall asleep and be done with it. it worked, for about ten minutes. i then got up and puked AGAIN, only this time, i have no idea what i could've been getting rid of and my best guess is my stomach lining. then i cried myself to sleep. you read that correctly. i cried a little kid cutting the biggest onion ever, and re-ran the day's events in my mind, trying to figure out how the hell this all happened. a simple math problem should demonstrate it well: 8 beers + 0 ounces h20 + 95 degree heat + 600% humidity = feeling like dog shit for the rest of the night. good work, melissa. you are officially a dumb ass. and the worst thing about it is that i started my day at a baby's birthday party. good example for the children, yes?
there you have it kids: mama's first real hangover. tsk, tsk. just had me a cheeseburger and a real coke and i am on the road to recovery. i don't expect any sympathy; i know you've probably all gone through this before, perhaps multiple times. more belated rites of passage next time, when our topic will be "the time i got my driver's license" or maybe "the first time i got cramps."
Posted by melissa at 12:00 PM 8 comments:

Labels: learning lessons at 25 i should've learned at 19ish

remember when i used to blog?

hello friends. it's me, melissa. remember me? shit, i hope so. :) you know how sometimes when you haven't talked to someone in forever it's hard to catch up on what's been going on with you, because it seems like so MUCH has been going on with you, even if really nothing special's been going on at all? well, that's where we're at, amigos. i have been busy, as usual, but not too busy to blog. me falling by the wayside here is a direct result of acquiring some virus on my computer at work (damn you, facebook), which is where i, foolishly i admit, do most of my blogging. anyhow, my absence from the internet usually means i'm all up in my head about something, but that's not the case this time. things are business as usual around here. work's going well. my boss is out of town for a week so right now work's going REALLY well. i baby-sat arlo and roxy while mom and pop hills were on vacation, and that was an adventure. (a good one!) had dinner with princess jackie one night while she was in town, which was superb because i hadn't seen her in months. went to mtn. home for father's day to hang out with my daddy, who i love love love. and of course, i'm always looking forward to furture happenings. nate the great turns the big o-n-e this week, and i'm very excited to celebrate with my extended, selected family this weekend. can't wait to sun it out in the park with jenny bug and maddox, whom i've yet to meet and hug and kiss and squeeze. (and sarah and lucia? and brooke and her growing belly baby?) can't wait to go to mtn. home (againnnnn) for dock night, tatum and melissa style. can't wait to watch fireworks and light a million sparklers. can't wait to see scott, who i promise will eventually be here (do you think i made this guy up yet? look, he's for real. we are having scheduling obstacles!). can't wait can't wait can't wait. all right, that's enough from me. again, no pictures. again, no way back wednesday. just another chapter in the book i'm working on entitled: "shit i have done / am doing that no one cares about but me." :)
Posted by melissa at 10:29 AM 4 comments:

did i tell you?

the last week has been banoodles. depending on the frequency with which you and i are in contact, i may or may not have told you the following information:

i can't find my camera cord. um, there hasn't been a hell of lot of progress made on the un-packing, see? but i will find it soon, and i will show you pictures of my rad new digs, grocery-filled refrigerator included. xo

Labels: lists help me get to the point more quickly

the dust has settled.
i live alone.
yesterday was kind of dramatic, but also hilarious.
and you know what? it was pretty fucking fun, too.
my fridge contains only pickles and grape jelly.
but there's vodka in the freezer.
so come over anytime. :)
Posted by melissa at 7:32 AM 5 comments: