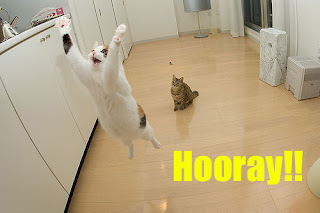 i spoke to my doctor this morning and i DO NOT HAVE lymphoma or anything even close!!! wooo hooo!!! *deeeep breath and a HUGE sigh of relief* what i do have is something called sarcoidosis, which i semi-suspected after both my GP and my pulmonologist mentioned it. it is an autoimmune deficiency that may or may not be a part of the rest of my life. after i got off the phone with the doctor i immediately googled it and checked webMD which had me pretty much shit-scared for a little bit; there are some not so nice things that might go along with this diagnosis. but i pulled myself away because, you know what? i'm going to be fine. and until i can sit down with my doctor and talk to him about what's going to happen to me, there is no sense in focusing on the worst-case senario like i've been doing since this whole thing started. so, i have to go to the hospital on monday afternoon to get some blood work done and take a more intensive breathing test to see what happens next. and until then, i'm just going to be relieved because even if it's bad, it could've been ten times (maybe twenty!) worse. a lot of you have left the sweetest comments and some have called and couple have listened to me cry and panic and i want to really really really thank all of you. seriously. most of the time i feel like i'm tough as shit, but even batman had some back-up, right? : ) thanks and i love you. i'll keep you posted. HOORAY!!!!!!!
Posted by melissa at 12:14 PM

Labels: not the best news ever but hooray anyway

I know that I'm definitely not the "Robin" to your "Batman", but can I be something....maybe Alfred....or Batgirl?

Huzzah! Good for you!

hooray for sister!!! i'm so so so happy. tell big mike that he can be batgirl. he's not cool enough to be alfred. but i think i might be. looove you. :)

I'm so glad! I can't wait to see you on Friday. I love you

Well, if Meg's not going to be Robin, I'd like to put in an application.

i love you and you have been in my thoughts since day one. i know you had a lot of support and love surrounding you and i am so proud of how strong you have been. our experiences make us who we are but i know sometimes we wish we didnt have to have them. love kimbot

HOORAYHOORAYHOORAY!!!!!! The cat photo expresses it well.. lol!! I shall take fun photos with your hot (and healthy) ass this weekend!!!!