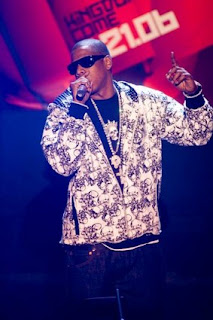 i'm posting a picture of my boy jay-z because i was initially going to free-style this post. but i am too embarrassed to do it. i don't know if my rap skills are up to par. so i will instead just speak my piece it like the suburban white girl i am. : )
so, overtime is nice and i refuse to complain too hard about getting paid time and a half. but overtime this week at my job is mandatory. that's right, MANDATORY. that sort of sucks all the fun out of it, you know? we're under-staffed, under-motivated, and definitely under-paid. i don't know if all of these words need to be hyphenated or not. that's how run-down i am. damn, another maybe-hyphen. oh god make it stop.
it's wednesday, so you know what that means. ANTM, bitches. that's what it means. and idol cuts, although i'm quickly losing interest as it seems the voting public insists on painfully watching sanjaya until the bitter end. damn you, teenage girls. damn you all.
i need a night out. let's go dancing and drink our weight in cheap beer. who's in?
Posted by melissa at 1:13 PM

I'd punch a baby to be able to go out, drink cheap beer, and sit on the side as everyone danced with you tonight. My social life is sadder than Paris Hilton's ACT scores.

oh beautiful melissa. if i was in con-way (hyphen), i would definitely get trashed with you anytime, anywhere. love you sister. keep on keepin' on little doggie. you'll be fine.

Top Model was good tonight. Who do you want to win??? Next time we are all together we should dress up and play America's Next Top Model. I will win

i will play america's next top model with you guys. i don't know why jenny thinks she will be the winner though.
you're such a baller
a baller is a good thing right? like goes with a rapper girl kinda thing? can you tell i'm not down with the lingo?