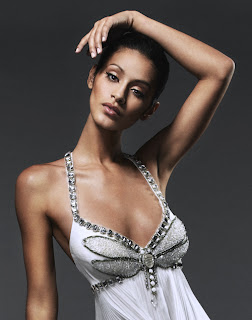 okay, so i always give big mike a hard time for blogging about lost since i don't watch it and it makes his posts mean nothing to me, but i can't NOT write about ANTM today, especially since i've been waiting all season for jaslene to win. and guess what? SHE FREAKING WON! oh man. good show last night. for starters, renee got third place because she "looks old." i don't think she looks any older than me... and i know i don't look old... anyhow so it's down to the russian and my girl and tyra had me there for a second. i really thought natasha was going to take it home. but with lines like, "if natasha wins this, i'ma pull out all her hair" and "no, i'm not the girl next door. i'm the girl down the block in your hood," how could anyone but jaslene win? plus she looks hot on the runway. plus she's just precious. plus, i'm so proud it's almost like i gave birth to her. the only downside is that it shouldn't matter either way for me, you know? i mean when was the last time we saw a winner appear in anything but like 2 covergirl ads and make a guest appearance on a future cycle? i shouldn't care this much. but i do care. and perhaps (no, almost certainly) that makes me ridiculous, but i slept easier last night knowing that jaslene took home the crown. BIG SIGH. now there'll be no more ANTM until september. what in the world will i do?

Labels: i know she's too skinny but dammit she's adorable

j-j-j-j-j-jaslene!! as a faithful antm viewer, i was so sad when she didn't make the cut last year because i think she's too precious for words. but, in true ghetto style, she tried again and kicked major ass. i can only hope good things for you, my little latina firecracker. know that you have many fans in the great state of arkansas.

who names their kid jaslene?

ho ho DO NOT START WITH ME. sorry. i just get all riled up.

I was happy with Jaslene winning (no big surprise there, really)- but neither of their commercials were very good. I loved that it was (as Tyra put it) "the battle of the accents." Niiiiiiice and PC, Miss Banks.
PS... those are totally not her boobs in that picture! Unless she bought some new ones after the show, cause she has negative boobage (which is great, it's just... those aren't hers, for REALS).
Yay, ANTM.

um i'm not the girl next door. i'm the girl down the street from the hood.