...but it was a good weekend. matter of fact, it was a great weekend. friday night i was dr. mchottie at a party where i knew hardly anyone, and thank goodness because it was probably the most adult drama i've ever seen in one night, excluding thursday night television. eleise was SUPER cute as an eskimo and was SUPER sweet to allow me to borrow her outfit when i realized that the shin-dig in russellville was also a costume party. i couldn't wear the scrubs... we had some glow-sticks friday night... someone popped 'em open... i had fun drawing on myself... no time for laundry... anyhow. mike was a spartan, i was an eskimo, we both were maybe a little bit out of control. 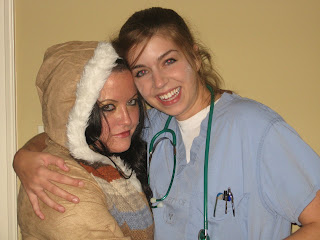 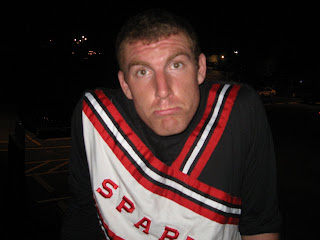 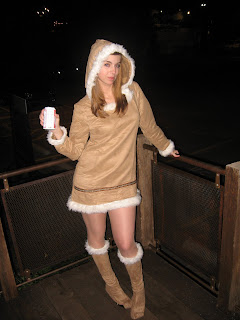 but we seriously had a good time. so why thumbs down monday? i got to work at 6am, and came home at 8:30. i started getting all shaky and sweaty and pale and i felt like i was going to black out at about 7:15. so then i puked (GROSS) and then i ate something. and i feel no better. *sigh* so i came home and i actually just woke up. it's 1pm. i loooove days off, but not at this price. boooo. tomorrow's a new day. fingers crossed that i make it until then.
Posted by melissa at 11:48 AM

Labels: no mom i do not have alcohol poisoning

I think I wanna be an eskimo next year. Hello hottie!! :)) Love it!

cute costume! and I hope you feel better. :(

Eskimo is a nice look for you. Sorry you feel so crappy. I did the halloween party too saturday and I didn't feel right all sunday. Not that you're condition is alcohol related. Anyway, yes I will be home for the thanking of the turkey. You going to be in MH for the whole weekend?

nose wiggle to you and well wishes for a speedy recovery peppermint patty!
xoxoxox

...And, based on that picture of you as an eskimo...you don't need to lose weight Miss ANTM legs! Tyra would be proud...and Nigel would love the composition, of course.